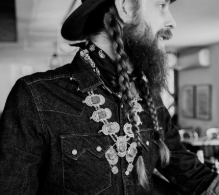 Damon Boelte is an award-winning bartender and co-owner of Grand Army Plaza bar in Brooklyn. He’s worked at LeNell’s Ltd., a renowned spirits shop, and Prime Meats in Carroll Gardens. He’s also consulted for many bars and restaurants in New York City and beyond, and worked with many spirits and beverage companies, such as Maker’s Mark, Plymouth Gin, Tito’s Vodka and Corzo tequila. He’s co-hosted more than 300 episodes of HRN’s show The Speakeasy.