This week’s guest is Beatrice Ajaero, the third of six siblings, was raised on Roosevelt Island, a sliver in the East River between Manhattan (of which it’s a part) and Queens. Her mother’s family has roots in New Jersey, a neighboring state that, like New York, is home to many Nigerian Americans, and her mother’s memories of “how her aunties cooked” are re-enacted in the family kitchen to this day. “My mom still guides the menu” at Nneji, Beatrice adds. From the age of 12, when she was the youngest student in a cake-decorating class, Beatrice had wanted to be a food entrepreneur. Rather than pursue culinary school, however, she went off to Bard College, about 100 miles up the Hudson River, then to the University of Buffalo School of Law, near the Canadian border, where she lived with her godparents. Her godfather served as a cook in the National Guard for many years, and Beatrice took to heart his work ethic, which tempered culinary talent with diligence.
During this time she traveled to Africa, where she had the opportunity to study food traditions firsthand. Notably, in the summer before her third year of law school, Beatrice ran bakeries and restaurants in the Gambia, where she took up the challenge of minimizing imported supplies by sourcing domestically. Eventually, with both a B.A. and J.D. in hand, she returned to Bard for its M.B.A. in Sustainability program. After launching an African Art gallery on Roosevelt Island with her mother, IBARI became annual vendors at the Saturday Farmers Market and in September of 2019, an international fine food and gift shop in Astoria. Last June, Beatrice opened Nneji as a way to share traditional West African dishes complete with grains such as garri (cassava) and fonio (millet).
----
Bio provided by Beatrice Ajaero, culled from Culinary Backstreets.
Find Nneji and Ibari on Instagram: @nneji_astoria and @ibari.nyc
----
Follow Item 13 on social media: Instagram, Facebook and Twitter @item13podcast
Don’t forget to subscribe & leave us a review! 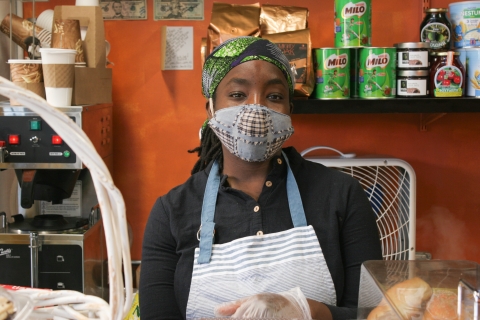 Item 13 is powered by Simplecast.

Ruth Nakaar is the founder and owner of Fudena, a food concept currently based in Philadelphia that aims to be America’s first West African fast-casual rest

Rachel Laryea is the founder and CEO of Kelewele, a food service and cultural lifestyle brand reimagining plantains in its mission to connect the African