We open this all L.A. show by cruising down Ventura Boulevard in Sherman Oaks to pioneering restaurant, Anajak Thai. Justin Pichetrungsi is Anajak’s second-generation chef-owner, having joined his family’s nearly 40-year-old business a few years ago. Since coming onboard, Justin’s updates to the menu, which include adding a taco night and stellar list of natural wines, have made Anajak the buzziest Thai restaurant in the Valley.

Musical guest singer-songwriter Henry Hall has been known to weave a good bit of humor into his work, and perhaps that’s no surprise given his parents are comedians Julia Louis-Dreyfus and Brad Hall. Henry’s dreamy pop sound first caught everyone’s attention back in 2016 with the release of the single, “Frenemy.” Since then he’s played The Tonight Show with Jimmy Fallon, and released his first full length album, Neato.. 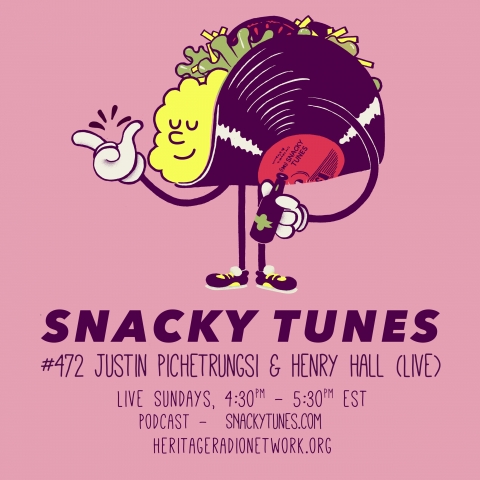 Leslie Merinoff is the co-founder of Matchbook Distilling Co. in upstate New York.

We check back with New Orleans hero Devin De Wulf, who we met last year through his efforts of Feed the Front Line. He catches us up on his teams’ year of activism and new efforts.

Greg & Darin were invited to sit down with Print: A Bookstore to chat about their book, Snacky Tunes: Music is the Main Ingredient, Chefs and Their Music (Phaidon).

International Pizza Consultant and longtime friend of the show, Anthony Falco, stops by for a hang.