This week on Beer Sessions Radio, Jimmy welcomes in Michael Opalenski from B United Imports; Justin Philips from Beer Table in Grand Central Terminal, NYC; and William Lees-Jones from J.W. Lees Brewery in Manchester, UK. The group welcomes the holiday season with a winter beer tasting, starting with JW Lee’s 2002 and 2015 Harvest Ales, and finishing with De Dolle’s Stille Nacht. Before tasting the aged beers, Michael explains the rising trend of “vintaging” beers. Later on, Justin explains that vintage ales actually launched his interest in craft beer. For William on the other hand, his family has been brewing beer since 1828, and it was his father who took on the challenge of brewing a strong beer with natural fermentation. The group takes a stab at food pairings, starting with the 2015 Harvest Ale. Michael suggests a creamy caramel with a hint of orange and Justin recommends a butterscotch pudding with sea salt. Switching to the De Dolle Stille Nacht, which translates to “silent night,” Justin described this classic beer as a Belgian winter warmer. Finally, William wraps with a toast, thanking retailers like Justin for pushing the boundaries and Michael and his team for launching his beers to the US.

Then, Jimmy brings on Dave Lopez from Gun Hill Brewery in The Bronx, NY; and Jimmy Ludwig and Mark Aldrich from The Happy Hour Guys. Jimmy and Mark walk us through the Broadway Brews project, where they created one-off beers paired with Broadway shows. Their sixth and final beer hit just as 2020 kicked in, so the duo decided to launch a new project called Curtain Up. Casting Gun Hill Brewery for help, they now have a 6.5% hazy IPA that is being brewed across the country with proceeds supporting the entertainment industry across all fronts. 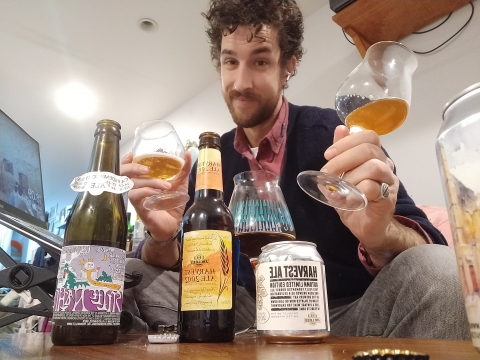 This week on Beer Sessions Radio, Jimmy is highlighting a new variety of New York state barley, following it from development at Cornell University to utilization in breweries across NY.

This week on Beer Sessions Radio, Jimmy welcomes in Michael Opalenski from B United Imports; Justin Philips from

This week on Beer Sessions Radio, enjoy a conversation recently recorded during Cider Week with Autumn Stoscheck and Ezra Sherman, who are partners in life and at

This week Beer Sessions is heading down the Hudson River.