This episode was produced in partnership with Discover South Carolina and Charleston Wine + Food.

This week on HRN Happy Hour, we’re learning about South Carolina’s culinary scene from the people who know it best: its Chef Ambassadors! Meet Raffaele Dall’Erta and Jason Tufts, of Sumter and Aiken, respectively. They discuss the people, culture, ingredients, and relationships that make South Carolina’s food scene so dynamic. Both Raffaele and Jason have used their talents as chefs to build fine dining destinations in small towns.

Born in Milan, Raffaele Dall’Erta struck out on his career path at the tender age of 15, attending culinary school at Vallesana in Northern Lombardy. The rich traditions of family, food, and Italian culture are the foundation of his culinary ethos. He has worked in esteemed kitchens like The Far Duck in the UK and Per Se in New York. After an 11-year turn as sous chef at the Inn at Little Washington, he landed at Hamptons in Sumter in 2010.

Chef Jason Tufts can thank his mama for his culinary career. As a high school student, he took a job washing dishes for a downtown Aiken restaurant, which gave him an inside look at the behind-the-scenes dynamics of a chef’s life. He honed his skills at the Doctors Hospital of Augusta, the Green Boundary Club, and the Woodside Plantation Country Club, both in Aiken. In 2017, he was named executive chef of Malia’s, one of the town’s most popular restaurant 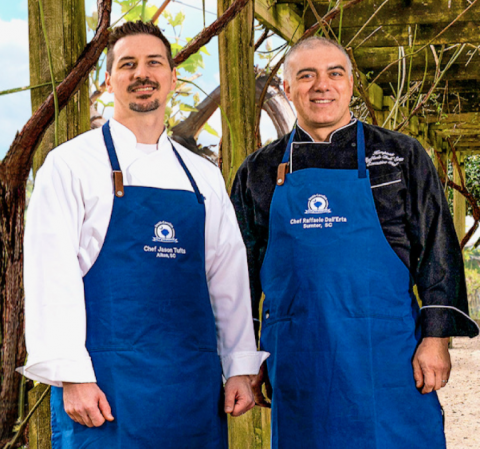 On this episode of HRN Happy Hour we're thrilled to present the first episode of one of HRN's newest shows: Fields.