A Behind the Scenes Look at Haven’s Kitchen

by Jessica Krainchich and Ruby Walsh 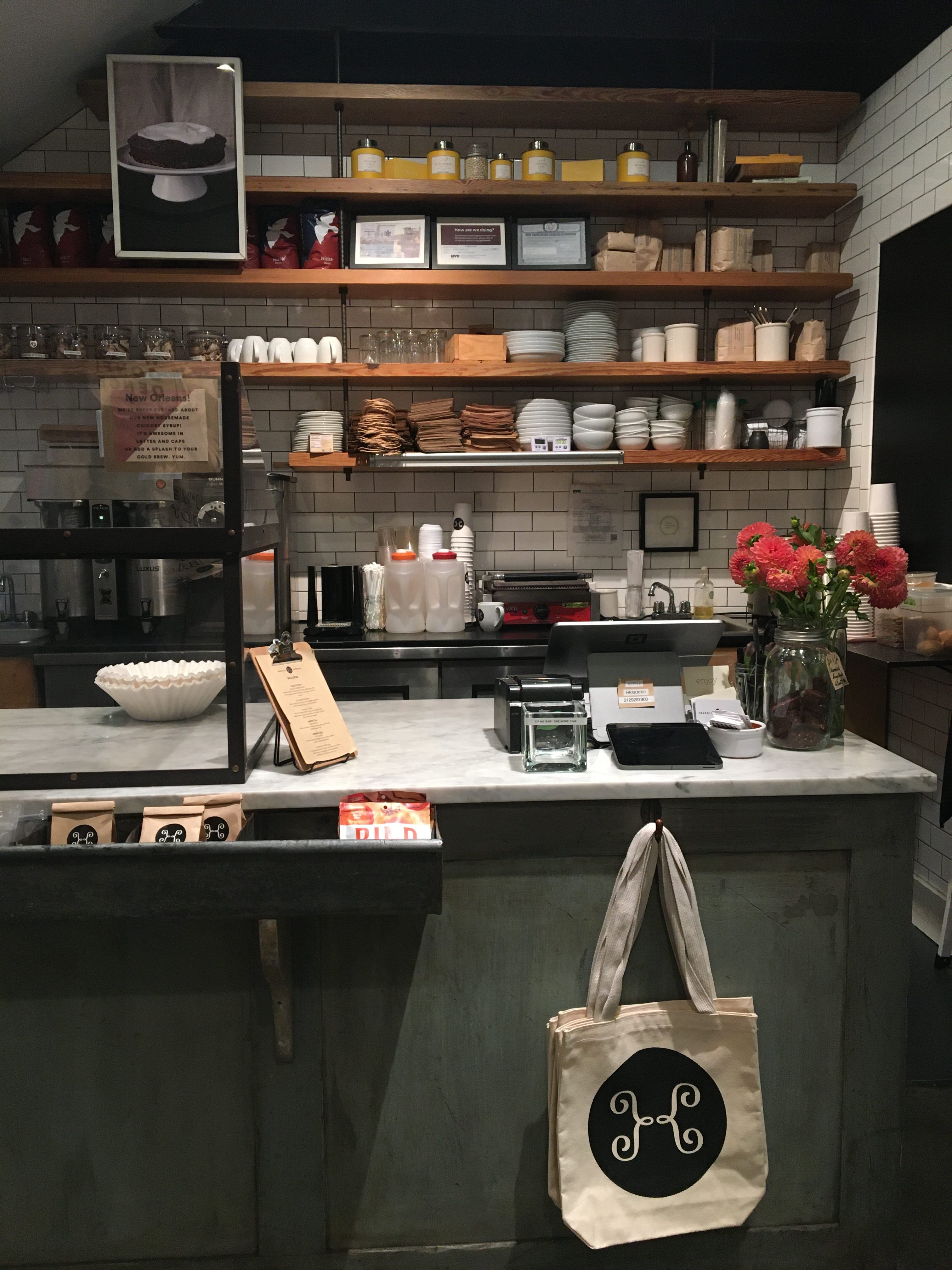 The Coffee counter at Haven’s Kitchen before opening.

The cafe at Haven’s Kitchen is a bright and welcoming space where eaters can delight in a seasonal menu, cooking classes, and the cafe’s own line of sauces.  The Haven’s Kitchen Cooking School even published their own eponymous cookbook, an amazing resource for beginners and pros alike. We recently spent time with head chef, Adi Fracchia, and head barista, Grace, to get a look at their day-to-day operations.

With a commitment to creating healthy and innovative food experiences, it’s no surprise that even the kitchen was visually delicious.  Stacks of fresh eggs, plump red peppers, and beautifully organized spices lined the tables and shelves. Amidst the hustle and bustle of making pastries and meal-prepping for lunch, kitchen manager, Greg, found a moment to show us how the team prepares for the day.

“We prepare everything for the cafe. Breakfast and lunch. Pastries,” Greg explained, “And we do savory breakfast items, frittatas, also tartines, and we also serve lunch.  Which consists of soup, sandwiches, and salad, and everything is made from scratch, basically.  Farm to table. So we know where everything is sourced.” 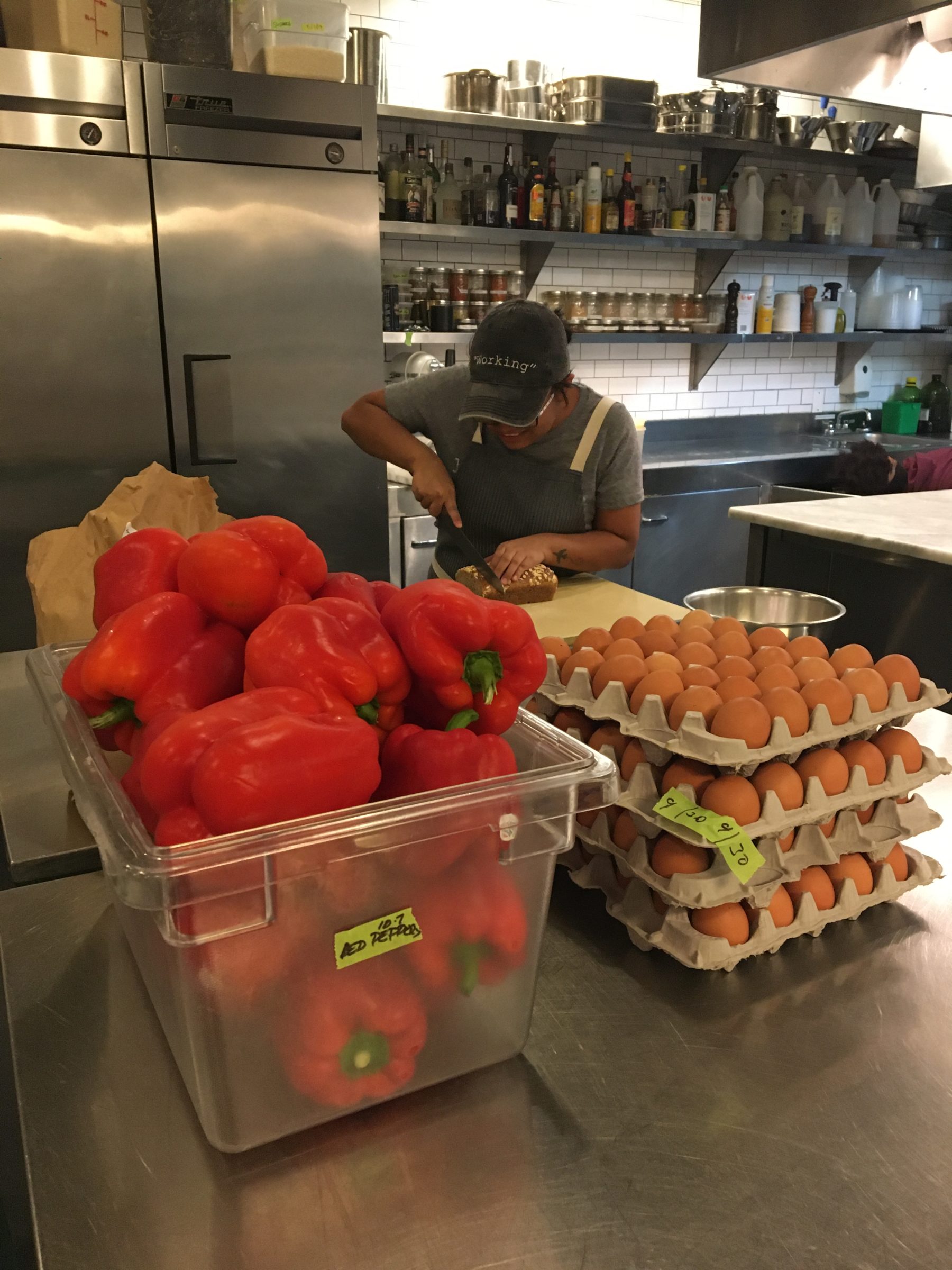 Fresh, locally sourced ingredients ready to be transformed into farm-to-table goodness. A chef prepares house-made bread for the lunch menu.

Entering the cafe, white brick walls, subway tiles, and marble tabletops reflect light all over the open space, creating a modern and clean, but cozy environment. “Ali brings in flowers every week, just to make sure the cafe looks pretty and trendy and tidy,” Grace told us, “And she finds all these beautiful flowers in the middle of December too, and we’re like, ‘where do you find all those fresh flowers that are so beautiful?'”

One of the first things the Haven’s Kitchen team does in the morning is dialing in the espresso, to make sure to pull the right amount. Grace walked us through the process as she ground coffee beans for the drip coffee. “We also use the same beans for making cold brew. Just is a blend we get from La Colombe, they make our own blend for us.  It’s called literally HK blend.” 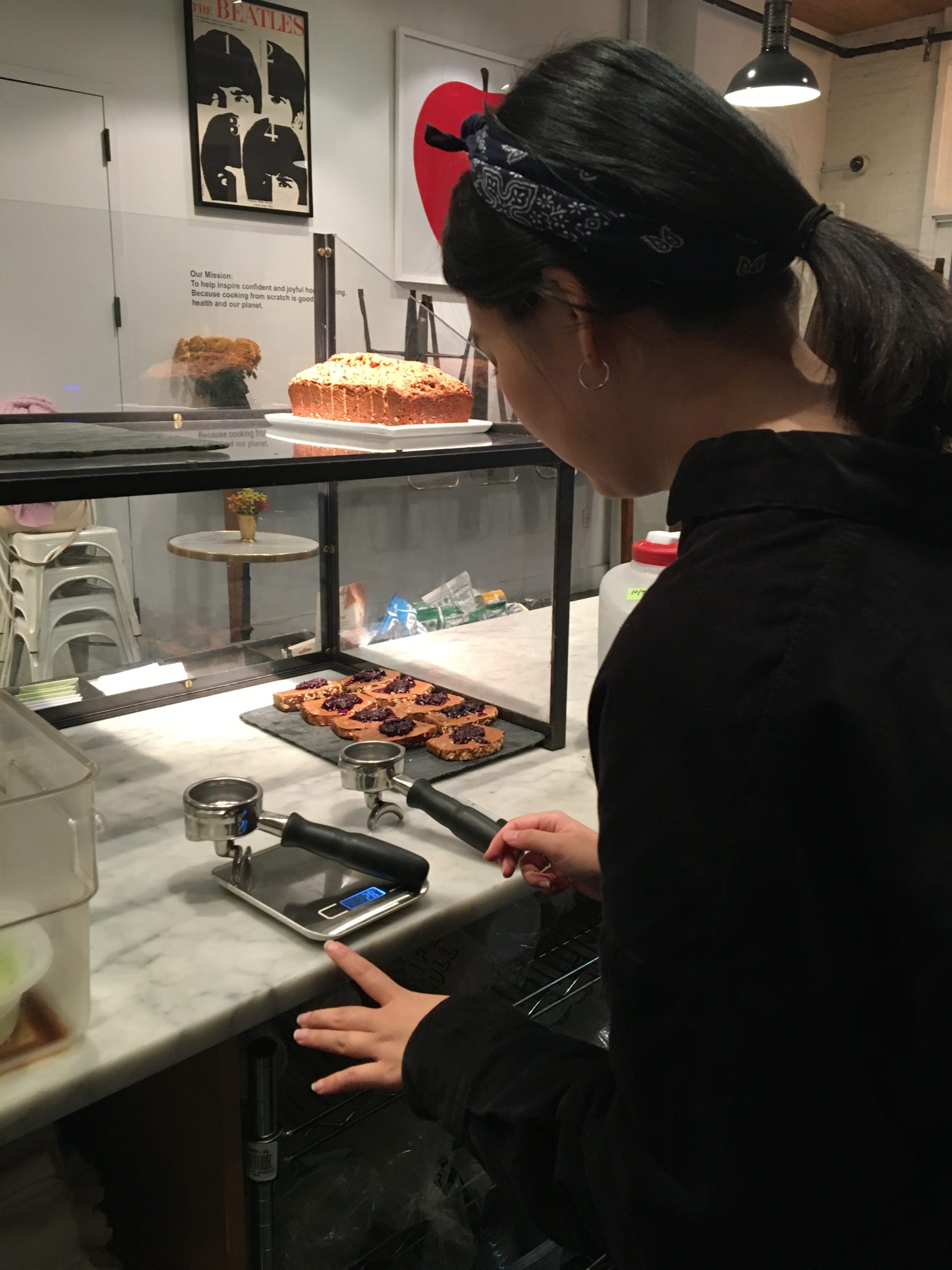 Head barista Grace checks the dose and grind settings for the espresso machine for the day.

Haven’s Kitchen beverage menu goes beyond just coffee. Guests also love the matcha latte (with tea sourced from Bellocq), as well as the turmeric latte (featuring an elixer made in-house).

Lined in glass bottles at the end of the counter are the cafe’s house made sweeteners. One labeled “bee sting” is honey flavored with a touch of vanilla, another, pumpkin spice, is a simple syrup infused with star anise and cinnamon. As with most things at Haven’s Kitchen, drinks are often made from scratch, including the almond milk. “We sweeten it with dates and there’s no added sugar,” Grace said, “We just soak the almonds overnight and then Jose, who takes care of the almonds, will blend it, strain it, mix it with water a little bit, and sweeten it with dates.” 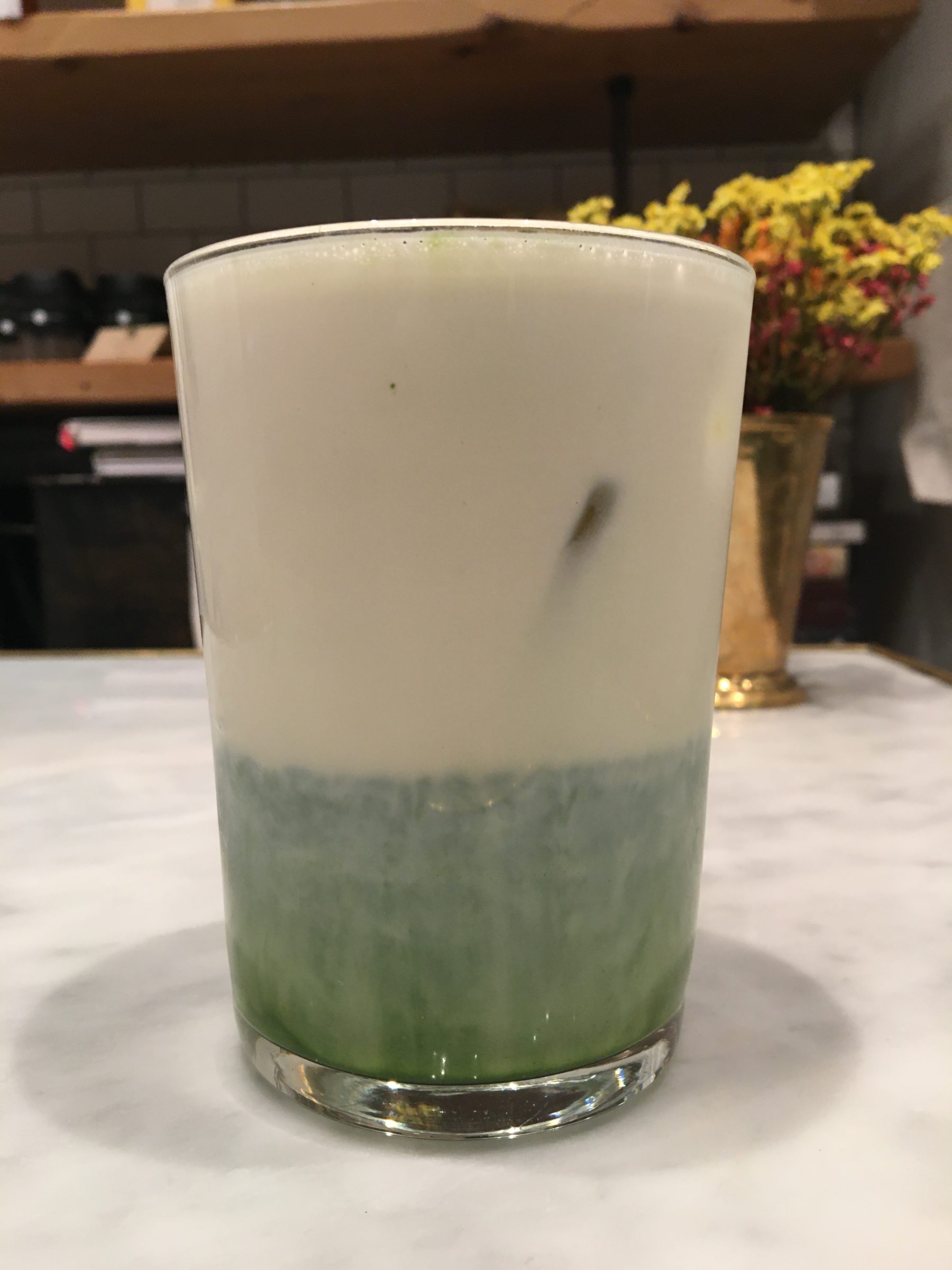 Haven’s Kitchen keeps up with the evolving tastes of its clientele, including the ever increasing demand for non-dairy based milks. Oatly, the Swedish brand of oat milk, has become very popular among Haven’s Kitchen guests and it’s easy for baristas to use. “It’s a little thicker, so it’s easier to steam the milk, and it just tastes better with espressos, in my opinion,” according to Grace, “So we do a lot of lattes, cappuccinos, iced cappuccinos, iced lattes, cortados, flat whites, all made with Oatly, or milk of their choice,” according to Grace.

Sweden’s Oatly has recently gained popularity in the States as a more sustainable plant-based dairy alternative. Oat milk has a relatively small environmental impact, especially when compared to almond milk, which requires an enormous quantity of water to produce. 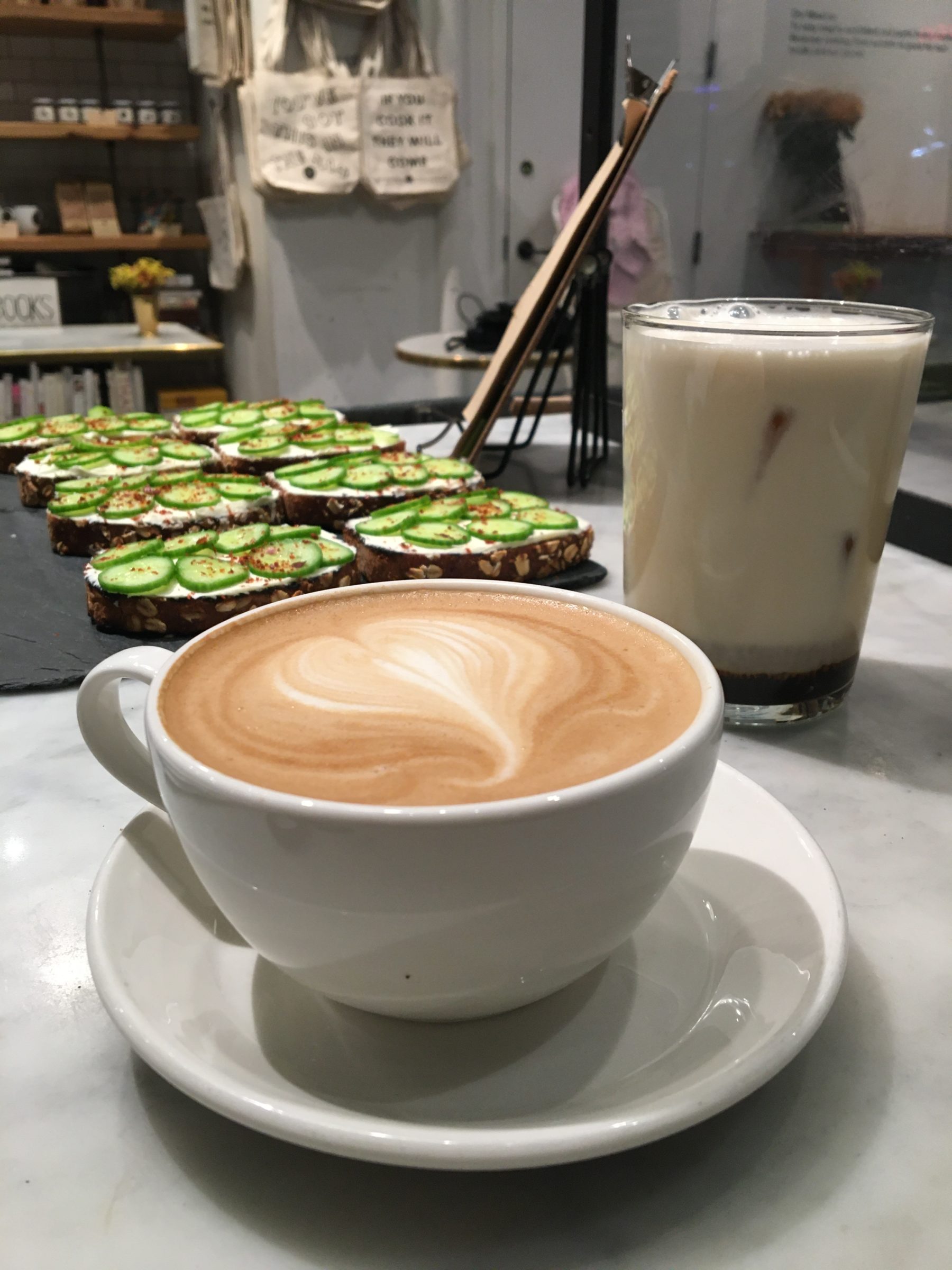 Hot and iced oat milk lattes, with one of the daily tartine selections; homemade ricotta with sliced cucumbers, and aleppo peppers

As soon as the cafe opened its doors, customers started flowing in, coming for their daily coffee, or even sitting down with a laptop to take advantage of the good food and atmosphere.  Grace knew many of them by name, and their orders by heart. “People have their favorites. So whenever they come in, we kind of know what they want. It could be a latte or a drink, or just cherry scone with drip coffee.”

With this sort of close relationship with their customers, Haven’s Kitchen is truly a retreat for busy New Yorkers looking for a savory moment amongst the city’s chaos.  To hear more about Haven’s Kitchen listen to In the Sauce, hosted by its founder, Alison Cayne. 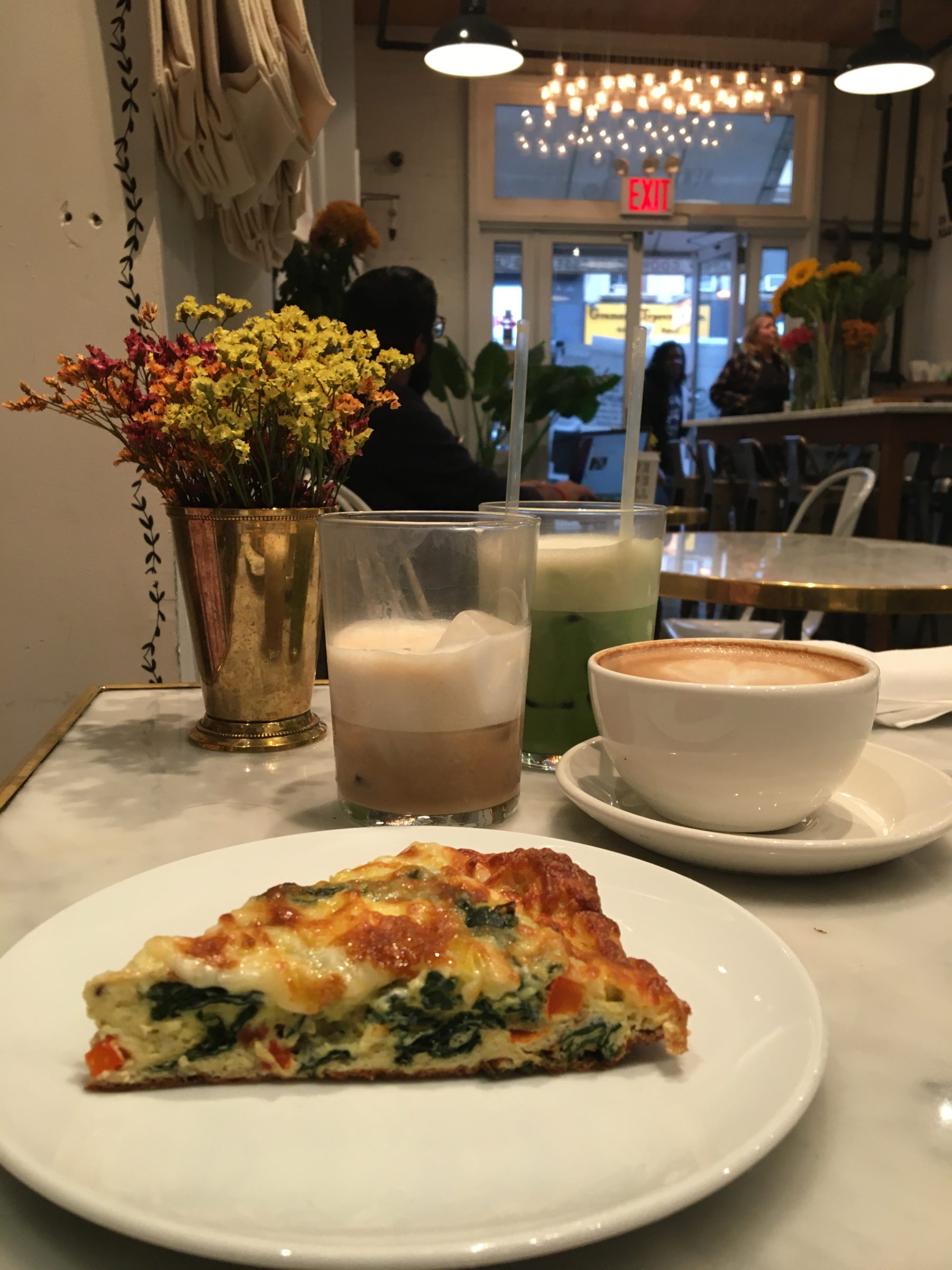 Melissa Duren Conner is a publicist and strategic thinker with 12 years of industry experience. As a partner at Jennifer…

Loren Brill is founder and CEO of Sweet Loren’s, known for its delicious clean-label cookie dough. On this eposode of…

Ellen Bennett is founder and CEO of Hedley & Bennett, the culinary lifestyle brand that redefined the word APRON. In…

James Richardson is the founder of Premium Growth Solutions, a strategic planning consultancy for early stage CPG brands. On this…