For seven years running, we’ve been serving up the freshest internet food radio from two converted shipping containers in the backyard of Roberta’s Pizza in Bushwick, Brooklyn.  Our 32+ weekly shows feature a range of food thought leaders and industry experts, from brewers and bartenders to pastry chefs and policy makers, whose conversations about food go far beyond the boundaries of traditional media.

The CBS This Morning segment highlights the growing popularity of podcast media, and showcases Heritage Radio Network as a pioneer in food radio. It features HRN board member and host Chef Emily Peterson answering your burning questions about grilling on Sharp & Hot, as well as host Joe Campanale with guest Arvid Rosengren, who was recently recognized as the world’s best sommelier, on In the Drink. HRN Founder Patrick Martins and Executive Director Erin Fairbanks share insights about the history and future of the network.  Click here to watch the segment! 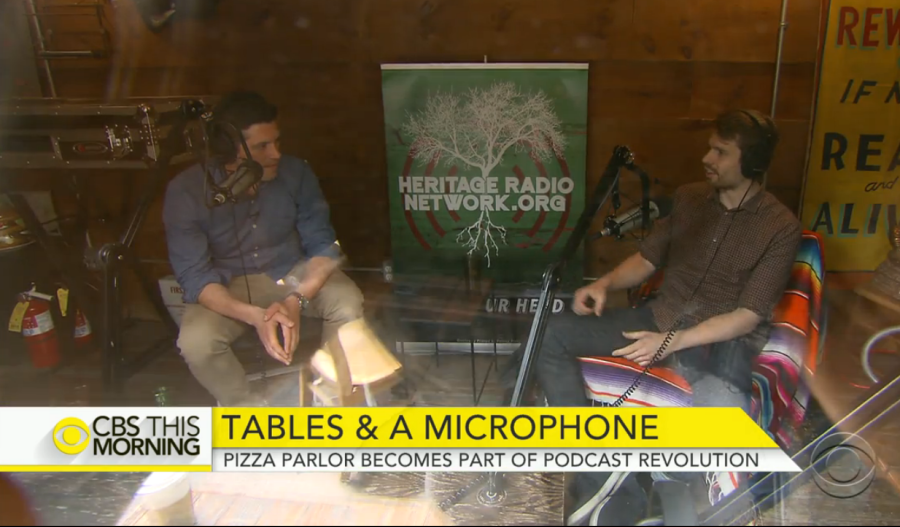 All Heritage Radio Network programs are recorded and streamed live, and available as podcasts on iTunes, Stitcher and HeritageRadioNetwork.org.

“I think that food is politics. When we looked outside in the media world, there were enough cookbooks to build a mountain taller than Mount Everest; but there wasn’t anyone talking about El Niño’s effect on the wine harvest.”  – Patrick Martins, founder of Heritage Radio Network

“We’re not trying to be a lifestyle network. Our hosts are really practitioners; they run restaurants, they run nonprofits, they are farmers. So there’s no degree of separation.” – Erin Fairbanks, Executive Director of Heritage Radio Network