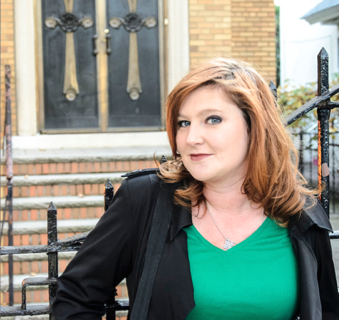 Born in Brooklyn, Allison Robicelli of Robicelli’s Bakery started out in the food business more focused on the savory side of things, working as a catering chef for several years. But she was no stranger to sweets. While learning how to be a chef, Robicelli ran a cake business out of her parents' house.

In 2005 she met Matt, a fellow food industry veteran. The pair started dating and soon got engaged. Allison and Matt married in October 2006 and have since welcomed two sons, Atticus and Toby.

In 2008, she and Matt launched a gourmet foods and sandwich shop in 2008. While economic difficulties led them to close that shop, the pair spun off their popular cupcakes into a stand­-alone business: Robicelli’s Bakery in Brooklyn. In 2013, they published their first cookbook, Robicelli's: A Love Story, with Cupcakes.

"When you go to Baltimore, it’s not The Wire, it’s not homicide Life on the Street, it’s not what you saw on TV. So a lot of people are really happy that people are coming and believing in them, and the food scene is insane down there." [9:15] – Allison Robicelli