Episode Four. The cereal: Cap'n Crunch. The guest: Eric "Badlands" Booker. A competitive eater known as "The People's Champ," Eric "Badlands" Booker maintained a position at the top of the Major League Eating's rankings for over 15 years. He has excited fans at recent events by performing selections from his rap albums, Hungry & Focused 1-4, Extended Play, Surf & Stillwell & Big Man Mentality. He's currently ranked #13 in the world by MLE and remains among the most popular competitive eaters in America. Tune in as he eats an entire box of Cap'n Crunch on air in less than 6 minutes AND freestyle raps about cereal over the theme song. Incredible. This program was brought to you by The Wisconsin Milk Marketing Board.

"They call me the original gangster of competitive eating." [05:00]

Episode Eleven. The cereal: Honey Nut Cheerios. The guest: Karen Palmer. Karen is the Executive Editor at Tasting Table, a website and newsletter for culinary enthusiasts. Sharing her personal history with the epicurean delight known as cereal, it turns out that Karen lived in Italy for a time... 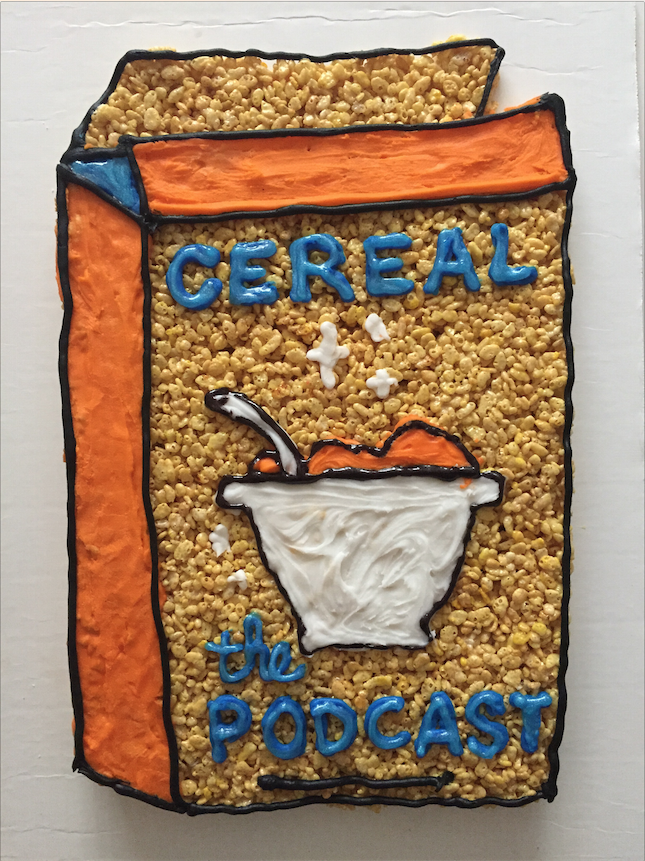 Episode Ten. The cereal: Rice Krispies. The guest: Jessica Siskin/Misterkrisp. Misterkrisp is actually not a 'mister' at all. NYC-based food artist Jessica Siskin began making edible Rice Krispie Treat sculptures in December 2012 when she discovered that food coloring could be added to the recipe on...

Episode Nine. The cereal: Great Grains Protein Blends Honey, Oats & Seeds. The guest: Mark Izzo. Mark is a real professional Cereal Man. He's the Vice President of Research, Development and Innovations at Post Foods. Hear about the history of cereal, the process of inventing new products and the...

Episode Eight. The cereal: Wheatena. The guest: Mimi Sheraton. Mimi Sheraton is a journalist, restaurant critic, lecturer, IACP and James Beard Award-winning cookbook author, and the woman about whom famed chef Jean-Georges Vongerichten declared: "Her knowledge knows no bounds, her glossary of...

Episode Seven. The cereal: Cinnamon Toast Crunch. The guest: Dale Talde. Dale is the chef and owner of Talde Brooklyn, Talder Jersey City, Thistle Hill Tavern, Pork Slope and Carrino Provisions. In addition to his work in the kitchen, Dale was also a two-time cheftestant on Bravo's Emmy Award...