Chef Francois Payard is one of the most highly regarded and critically acclaimed pastry chefs in the world. Hear him recount his culinary journey this week on Chef's Story. After moving to New York City in 1990 from traveling around Paris honing his skills in three-star Michelin rated pastry kitchens, chef FranÃ§ois Payard began his New York City career at Le Bernardin and Restaurant Daniel where he earned recognition in the kitchen as the 1995 recipient of the James Beard Association "Pastry Chef of the Year" award, honoring him for his unique pastry designs and high attention to flavor. In 1997, Payard opened his first PÃ¢tisserie and Bistro with Payard PÃ¢tisserie and Bistro on Manhattan's Upper East Side. Currently, Payard has locations in Brazil, Japan, Caesar's Palace in Las Vegas, and New York. Tune in and get to know the endearing French-born pastry mastermind on an insightful episode of Chef's Story. This program was sponsored by Hearst Ranch. 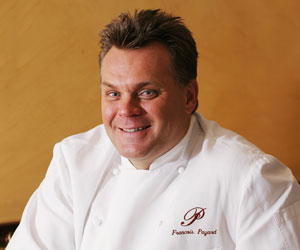 "Our business in pastry is almost like a florist. If you have two weddings at the same weekend, what can you do? You'll sleep 2-3 hours a night. During holiday's, you'll be in the basement baking!" [08:00]

"I think people used to understand that you have to pay your dues before you make it. The problem now is maybe the TV, it's changed the philosophy of people. They dream of being the Next Iron Chef but they forget that you need to pay your dues to get there. TV gives you the wrong image of things. What we do doesn't come easy. Most people spend 10 hours a day in the kitchen to be where they are right now." [25:00]

"A bakery is convivial. A pastry shop is something much more refined - where you find creations that you wouldn't find at a bakery." [35:00]