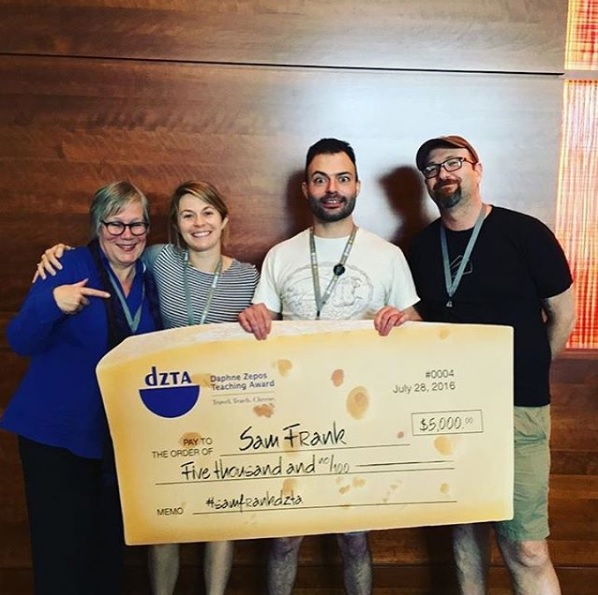 Daphne Zepos was a teacher, mentor and inspiration to many in the food industry. Her legacy is embodied by the Daphne Zepos Teaching Award, established in 2013 to promote the sharing of knowledge between Europe and young cheese professionals in the United States. On today’s episode of Cutting the Curd, host Greg Blais talks with last year’s award recipient, Tom Perry, and this year’s recently announced recipient, Sam Frank. Sam Frank (second from right) and one big check, alongside Tom Perry, Jess Perrie, and Debra Dickerson

Our host Diane discusses with Debra Dickerson, Director of Education and Customer Outreach at Cowgirl Creamery about the current atmosphere in the cheese market and what may be next for the industry. SAVORY Institute DZTA Daphne Zepos Teaching Award Cheese Culture Coalition Image courtesy of Debra...

A group of cheese professionals joined forces to help small producers in the US and Canada weather the pandemic, today we talk to two of the key players in this effort. Heritage Radio Network is a listener supported nonprofit podcast network. Support Cutting the Curd by becoming a member! Cutting...

The annual American Cheese Society Conference is virtual this year! The virtual event's theme is Moving Forward Together with Purpose, taking place from July 28-30, 2021. Heritage Radio Network is a listener supported nonprofit podcast network. Support Cutting the Curd by becoming a member! Cutting...