EPISODE 16 Distilling it Down: Spirits in the Mid-Atlantic

Food, farms and economic development have been Janna Howley’s passions since the early 2000s. Janna is currently the Director of Operations for Grow &amp; Fortify, which manages the Maryland brewers, distillers and wineries associations. In her previous position she worked for the USDA National Organic Program’s Accreditation and International Activities Division, where she conducted auditing and accreditation activities related to organic certifiers and international partners.

Alex Weiss started his journey into distilled spirits via a degree in Botany and a fierce love and respect for agriculture and the relationships humans forge with their environment. After a two year stint studying this subject in China, Alex moved to New York City and began managing sales for a grass-fed beef producer in Central NY. Eventually, Alex was approached by the founder and master beekeeper for Caledonia Spirits to come on board as a Brand Ambassador, becoming the Sales Director a year later and helping to grow the distribution footprint to 29 States and five countries.

As a nature lover and wildlife enthusiast, Monica Pearce built her career in the conservation field.  Monica has a BS in environmental science and policy from the University of Maryland and her Master’s in natural resource management from Virginia Tech. Prior to the launch of Tenth Ward, she worked for a few non-profits and even spent a year in the Galapagos volunteering for a biological station. With inspiration from the growing spirit industry, she chose to make the crazy leap into booze manufacturing.

Kyle Pfalzer is originally from Long Island, but came to the Frederick area to major in the Civil War at Shepherd University.  The job market for Civil War studies on Long Island being a little slow, he decided to stay (and is very glad he did.)  He grew up in a household that appreciated good beer which introduced him to craft booze.  He took up homebrewing as a hobby, and when presented with the opportunity to start a distillery it was a no brainer. 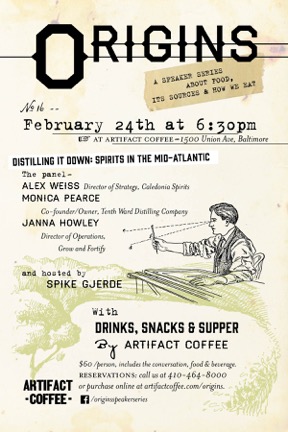 Thanks for joining us tonight for a very important topic –our local farms.  Today we learned that a local institution,…

Food insecurity refers to USDA’s measure of lack of access, at times, to enough food for an active, healthy life…

This episode This episode of ORIGINS features three representatives from the Evermore Cannabis Company located in Baltimore, Maryland. Medical marijuana…

This episode of ORIGINS continues the conversation we started on Thursday, September 20th about the economic impact of buying and…