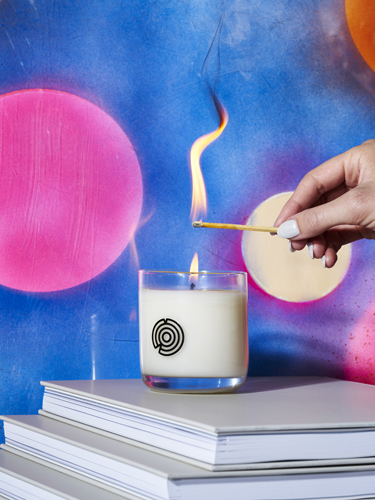 With our first 2017 episode of THE FOOD SEEN, we light the wick at one end with KeapBK.com (candles). Stephen Tracy and Harry Doullmet analyzing data for big brands at Google, eventually becoming roommates on Keap St. in Brooklyn. With their research, they saw companies like Everlane, Warby Parker, Casper, and Misen, cut out middleman, manufacture product themselves, and sell their singular products on simple website, well, that and a needlessly expensive candle industry which burns over 2 billion dollars a year of non-eco friendly materials! Coconut wax from California and scents that evoke the Greenmarket, Waves, Hot Springs and Wood Cabin, reminiscent of herbs, aromatics, fresh warm sea salt air, natural spa-water being poured over therapeutic hot rocks, and hikes over fall leaves past smoldering campfires; there are food memories associated with these smells, from beach picnics during the last days of summer to the founders European upbringings (e.g. British toast and tea, Parisian Tarte aux Maroilles, and meals of all-local mozzarella di bufala), that may suggest we first eat with our nose. [caption id="attachment_40345" align="aligncenter" width="500"] L to R: Harry Doull, Stephen Tracy[/caption]