On the season finale of Eat Your Words, Cathy is joined by chef, restauranteur, and cookbook author Rachel Yang. Since 2007, Rachel and her husband chef Seif Chirichi have built successful restaurants based on a wildly creative vision that combines their shared love of bold, unexpected Asian flavors with classic, rigorous technique. Their food is beloved by seasoned, adventurous diners and often considered a revelation by newcomers eager to expand their palates. The couple’s work is consistently acclaimed and recognized, including three James Beard Award nominations for Best Chef Northwest in 2013, 2014, and 2015. Through their company, Relay Restaurant Group, Rachel and Seif own and operate three restaurants in Seattle—Joule, Revel, and Trove—as well as Portland’s Revelry. Just like their food, the restaurant spaces balance formality and tradition with energy and creativity. Rachel is also the author of My Rice Bowl, a cookbook with 75 recipes based on her deeply comforting Korean fusion cuisine, inspired by cultures from around the world. 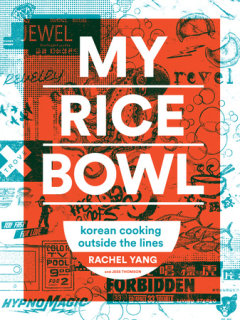 Eat Your Words is powered by Simplecast

Co-authors and veteran women in food media, Kathy Gunst and Katherine Alford join Cathy in the station to discuss the…

Veteran cookbook author Darra Goldstein visits the studio to chat about her scholarly new book on Russian cuisine, Beyond the…

This week, Cathy invites Priya Krishna to the studio for a chat about her latest book, Indian-ish: Recipes and Antics from…

Today, Cathy is joined in the studio by Sarah Archer, a contributor to Slate, The Atlantic, Architectural Digest, and more, on…

To kick off the spring/summer season of Heritage Radio Network, Cathy calls up Alana Kysar, author of Aloha Kitchen: Recipes from Hawai’i….