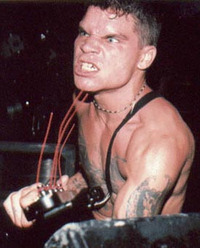 Welcome to this week's episode of The Judy & Mike Show...and no, that's not a typo! This week, Judy McGuire and Mike Edison are celebrating the release of Judy's new book, The Official Book of Sex, Drugs, and Rock 'n' Roll Lists. Tune in to hear more about some of the best 'best of' lists from rockers like Dick Manitoba, Ozzy Osbourne, and Keith Richards. Joseph Grillo, also know as Sid Jagger, is in the studio. Listen to some tracks from two of his bands: Gay for Johnny Depp and I Hate Our Freedom. Cliff Mott is also in the house talking about the illustrations he did for Judy's book, and what it's like to draw Ice T. Tune in to hear more about the book, Harley Flanagan's violent outbreak at Webster Hall, Kurt Cobain, and more! This program has been brought to you by Roberta's.