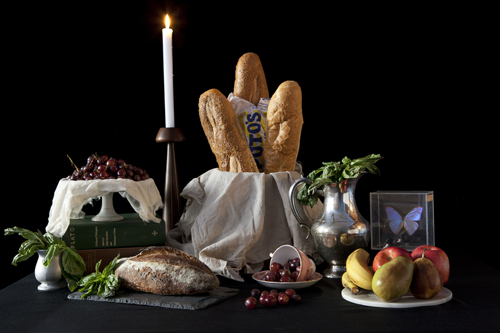 "Waste Not" with Aliza Eliazarov

On today's episode of THE FOOD SEEN, we reconsider the chicken with Aliza Eliazarov, who's compelling backyard poultry portraits ask, when does a bird become a "wing." During her time at the School of Agriculture at University of Connecticut, Aliza may have majored in Environmental Engineering, but an underlying interest in preservation and conservation issues found it's way into her photography. Aliza's seen South Central Farmers on strike because their land was being sold to developers, when Bolivia’s first indigenous President, Evo Morales, took office and had an agrarian reform plan to give land back to the people who had been displaced, when freegans went dumpster diving and opened up a world of food rescue. Her current exhibition, "Waste Not" on view at Fovea in Beacon, NY at the Hudson Beach Glass Gallery, until July 3rd, explores these topics through still life, seen in tableaus of gleaned produce from supermarkets and restaurants. When Aliza's not foraging for forgotten food, she's likely setting up a barn studio to photographing alpaca or draft horses for the cover of Modern Farmer, embodying true farm-to-table photography. *all photos courtesy of Aliza Elizarov