Back on episode two of Meat + Three, we shared a report about the escalating trade tensions between the U.S. and China. At that point, President Trump had implemented tariffs on steel, and China had responded by issuing counter tariffs on fruits, nuts, and pork, among other agricultural products.

There was much speculation that China chose to target pork because it would directly hit rural counties that supported President Trump in the 2016 election. However, there may have been more to China's strategy. We spoke to Loren Puette, the Director of ChinaAg, a market intelligence company focusing on Asian agricultural markets. Puette noted that "China right now is kind of in the midst of modernization campaign. They're looking to build up their pork farms. They're looking to essentially expand their herd size while also pushing out smallholder farmers."

While many American farmers became nervous about these looming tariffs on pork, there was one silver lining: no additional tariffs had been proposed for soybean exports. (Many U.S. farmers that raise pork also grow soybeans.) 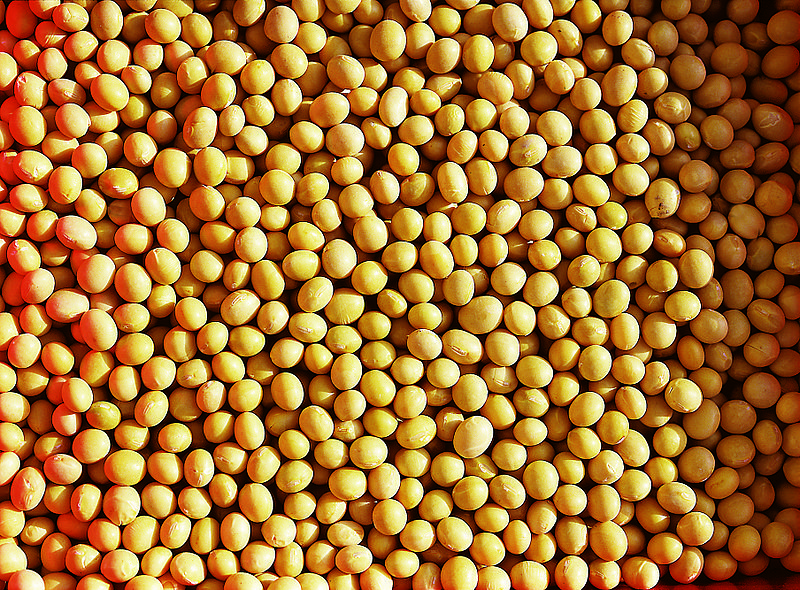 U.S. Soybeans that are exported to China are used to make cooking oil and animal feed

One important thing to note, Puette said, is that despite the $375.2 billion trade deficit with China, "When it comes to agricultural products, the U.S. has an actual trade surplus." Soybeans used to make up 60 percent of $20 billion of U.S. exports to China.

In April, we asked Puette if he saw a possible trade war looming, and he pointed to soybeans as a harbinger.

"That's pretty much the last card that China could play in terms of imposing tariffs on a major US export.... If there's a wholesale ban of soybean imports where zero metric tons are going to China, I would say it would be full fledged. Even if tariffs are imposed, I still think US soy will still go to China perhaps in less traction, lesser volumes, but it will still go nonetheless."

Now that tensions have further escalated and additional tariffs have been levied, we checked back in with Puette to get a sense of where agricultural trade between the U.S. and China stands and what impacts he's seeing to the global marketplace.

HRN: When we spoke a few months ago, you said you didn't consider the U.S./China tariff situation a "trade war." How do you think the situation has escalated? Are we now in a trade war?

Loren Puette: The trade dispute escalated into a full blown trade war on July 6th after both sides imposed 25% tariffs on a variety of imported goods. Chief among them were U.S. soybeans, a commodity that mainland China has become increasingly reliant on to develop its animal feed and edible oil industries. The U.S. typically accounts for 35% to 40% of China’s imported soybean supply, while roughly 30% of the soybeans grown in the U.S. are shipped directly to China.  Unlike other agricultural products such as pork and wine, soy is a commodity that not only helps feed China’s growing middle class, but also underpins the rural economy of America’s Midwest.

HRN: How do you think the escalating tensions are being felt by the average Chinese citizen, if at all?

LP: So far the impact of the trade war hasn’t been felt by the average Chinese citizen. This may change if the dispute drags on past October and November, which is when the U.S. exports the bulk (roughly half) of its soybeans to China. If China is unable to effectively offset this supply gap with substitutes (e.g. canola meal, sunflower meal, etc.), then a cascade of price increases will flow into businesses located downstream of the supply chain. Eventually, Chinese pork and chicken prices will increase due into higher animal feed costs. This in turn will put pressure on the country’s inflation rate since pork is a major consumer product used to help calculate the country’s Consumer Price Index (CPI). In general, food prices could increase while real incomes could drop.

To date, the most notable casualty of the trade war has been China’s Shandong Sunrise Group, a major soy importer that went bankrupt a few weeks after the July 6th tariffs. Meanwhile, the U.S.’s bulk carrier, Peak Pegasus, is wounded and treading water off the coast of Dalian. 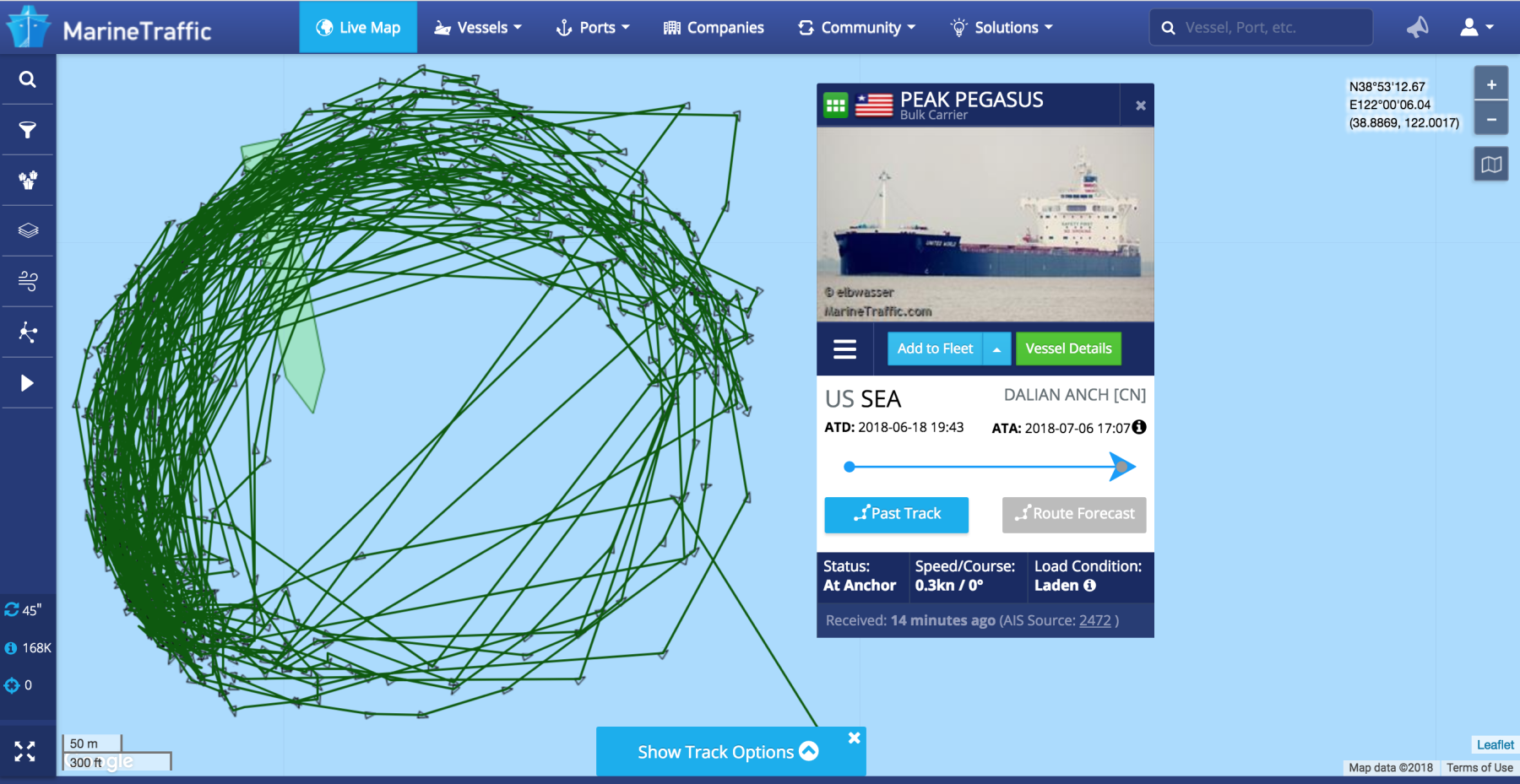 The Peak Pegasus tried to reach China before the tariffs went into effect, but just barely missed the cutoff. via marinetraffic.com

HRN: How have the new tariffs, proposed tariffs, and/or shifting politics around trade affected your work?

LP: Many foreign agribusiness companies recognize that there’s a real opportunity to grow their business with China in the wake of increased tariffs. As such, there’s been a surge in demand for ChinaAg’s market analysis and commodity reports.

HRN: What do you think is coming next? Do you have any predictions on agriculture or food trends – especially how they might affect average Chinese or American citizens?

LP: The main impact will be a doubling down of Chinese investment in Brazil, its top soy supplier. Brazilian soy supply to China typically runs from March to September. However, the expansion of farmland into central Brazil and the Amazon basin has meant that this seasonality can begin as early as January. Currently, logistics are an issue as roads, railways, and ports still need to be properly linked up before Brazil can take full advantage. However, these obstacles will eventually be overcome and the Chinese-Brazilian trade network would be such that the U.S. will have a hard time re-gaining any lost market share. U.S. soybean farmers therefore are looking at a lose-lose proposition, even if China eventually reverts back to the old tariff regime. Federal budgetary constraints permitting, President Trump will double down on the subsidies that he is paying to Midwestern farmers. He may use this as a model going forward, subsidizing domestic industries hurt by his trade policies and then uses those trade policies on an ad hoc basis.

Learn more about Loren Puette and ChinaAg at chinaag.org. Take a listen to our bonus episode of Meat + Three, “Farm to Market” for more analysis on how tariffs and bailouts are affecting U.S. farmers and farmers markets.