5 Things This Lady Learned from Sending Out 33 OKCupid Messages

I’ve been pondering timidity in dating a lot, recently.

I’m thirty-four years old, and am comfortably set in all the personal and professional endeavors that make living a single life in New York City super rad. But the idea of finding that one person who I want to see every day and like more and more the longer I know him? Yeah, I’d be down with that.

In my twenties, I was bold and brash… and half of a couple until I was 28. I made up for lost single gal time by bouncing from one fabulous mini-relationship or fling to another, until I naturally slowed down after that 30-year mark. Finding that next great guy became harder in my thirties: I don’t party as often, I work from home, and while I now have more to offer a partner I’m not as assertive about finding sex or love as I was in my younger years.

Most of the “meeting” part comes online now, as we’ve talked about thoroughly on Love Bites. A lot of our guests have shared their own mantras and pep talks, so now they’re like cheerleaders in the back of my mind reminding me to “assume everything is flirting!” and “hold eye contact with that stranger and give a warm smile” and “what’s the worst that could happen?”

Empowered by their voices in my head, I took to the Internet. OKCupid tells ladies that those who reach out to men get better-quality matches. My guy friends lament the poor rate of return of first messages. So what would it look like if I were to make the first move? What would those responses look like, by the numbers? Would I get quality responses to guys I actually wanted to date?

So I set out to send fifty messages over the course of two weeks. I used OKCupid as my source since it’s the dating site I interact with most often. And here’s what I learned: 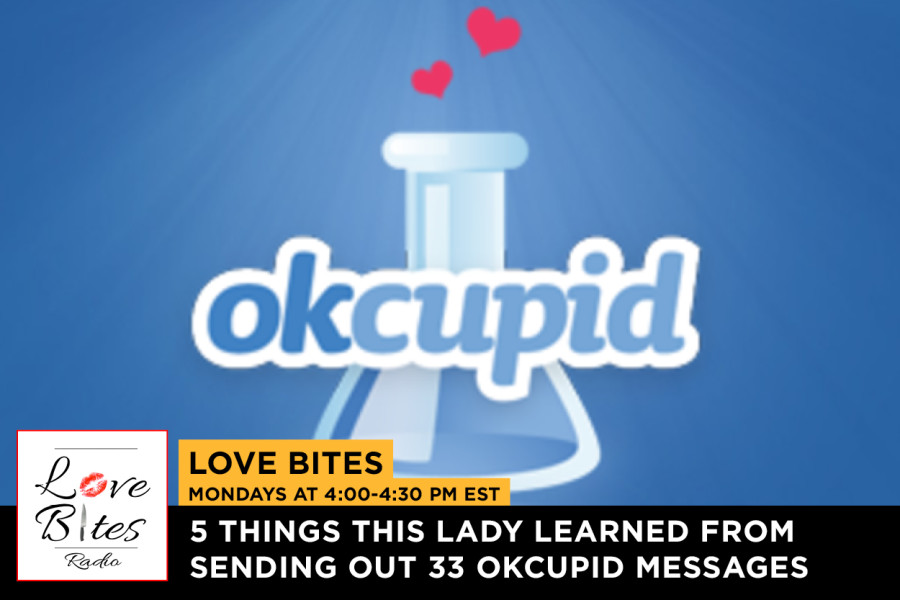 1) IT’S HARD TO FIND FIFTY GUYS YOU WANT TO MESSAGE.

It ends up there’s a huge difference between glancing through and “liking” a potential profile and being interested enough to shoot over a message. I questioned: am I too picky? But screw that, I want to be picky. I don’t want kids, so biologically I’m in no rush. I want big love with all its challenges and triumphs, and I’ll wait for that. But as messaging time went on what I discovered was two-fold:

First, it broadened the type of guy I was looking for. There is no way fifty perfect guys were going to happen to be in my feed over the two days that I did the majority of the messaging. And a guy who looks ideal on paper doesn’t mean he’s going to be a potential romantic partner when met in person, anyway. Some guys I didn’t consider fully ended up being the guys I actually dated for a while, too! So I started branching out a bit, messaging guys who had a lot of good going but who might be even better when we’d meet IRL. Which was sorta fun!

Second, it changed the kinds of messages I sent. At first, I’d focus on something that seemed important to both of us, mince in something flirty, and sign off with a question so that he’d feel more of a pull to respond. By the time I was in the twenty-something message zone, they were three sentences and a bit more general. Did that make a difference? Keep reading.

The Takeaway: I have a lot more sympathy for guys online, as they are usually the first ones to make a move. It’s a lot of work, and a lot of time. It’s made me rethink the messages I get, dismissing them less readily.

2) THE RESPONSE RATE IS HIGHER FOR WOMEN…

Overall, I messaged thirty-three men, and thirteen responded, most of them within hours if not only a day. In contrast, my co-host, Ben, got only one return on the twenty-plus messages he sent in his own version of the experiment. There was no difference in response if I sent a particularly thoughtful message or something simple. Ben’s take on that? “If a guy is interested, it doesn’t matter what the message says.”

3) …BUT THAT DOESN’T NECESSARILY LEAD TO ENGAGING OR REPEAT EXCHANGES.

Out of those thirteen guys, only seven messaged a second time after I’d responded to them, and out of those guys, only five asked me out. You’d think that, hell, five dates from thirty-three messages to guys you actually wanna meet isn’t bad, right? It wouldn’t be if all five of those invites led to real dates. But out of those five guys (plus the additional three that moved to texting conversations), only one led to a real, live, in-the-flesh meeting. And nine just ghosted completely at one point or another.

The Takeaway: You can’t take this personally. It was hard not to get my hopes up when those thirteen responses came in quickly. But when things went dead – especially the ghosters – it’s not like my world shifted. I felt no shame. It wasn’t embarrassing. I had lost nothing but time which, yes, is annoying. But you can’t just passively wait for sex or fun or love to find you, right? You at least have to be out there – online or looking in 3D – and so the loss of time is pretty mild. No permanent damage done.

4) SOME PEOPLE ARE JUST LAME WHEN IT COMES TO DATING ETIQUETTE.

You might think it’s an innocent exchange, but people are online to date. Yes, there are various goals with what people want those dates to lead to, but it’s not like we’re trolling OKCupid, Bumble, Tinder or Match because we’re bored (most of the time). So when lame excuses or ghosting come? That’s when it felt like a huge wasted of time.

One guy, an editor in Brooklyn, had gotten to the point where we’d been texting and planned to meet up until he decided that “we live too far apart.” Um, he lives in Brooklyn and I live in upper Manhattan. We’re in the same city. I told him he was lame and never heard back from him again. Another guy had sent a few fun emails back and forth and then said he wasn’t really in a dating place. Um, wha? Another was traveling and told me he was psyched to meet up when he got back (we didn’t).

The Takeaway: If you don’t hear back from someone, it has nothing to do with you (unless you’ve become a cyber stalker. But let’s assume the best). There’s no way to know what is going on in their lives to prompt their lameness. Don’t lose sleep over it.

Out of all of those thirty-three messages, I went out on one date. That date led to a second, and eventually a fifth and sixth. It led to hours-long conversations, and an exchange of books and ideas. Ultimately, it didn’t work out. But that’s okay, too. We’re still in friendly correspondence, and a beautiful idea for a cookbook he shared on our first date is now in loose production.

The Takeaway: Meeting one new awesome human is worth all of that crappy paperwork. I spent a few weeks getting to know an interesting guy with whom I went to restaurants, museums, and on a picnic. And I’m 99% sure our paths would not have crossed were it not for me sending that first message.

SO WHAT DID I LEARN OVERALL FROM THIRTY-THREE MESSAGES OVER TWO WEEKS, WITH THIRTEEN RESPONSES, NINE GHOSTS OVERALL, A FEW LAME EXCUSES, AND ONE GREAT DATE?

Yeah, there were guys I was genuinely interested in who never responded, and that sucks, because I’m actually online so that I can get offline for good and cancel these stupid smelly accounts. But scrolling through those flirty or deep or witty advancements now, not one of those guys jumps out as being so memorable that I’m mourning his absence in any way. I’m none the worse for wear.

Overall? I learned to be brave. I messaged a guy I had met in the flesh years ago, thought was cute, and would have been too shy to message when I saw him online, because “what was the worst that could happen?” I message guys only who I found intriguing, and not one responded with, “ugh, no thanks crazy lady”!

I wish I could share a romantic comedy happy ending of “meeting the guy!”, but I can’t. Instead, I’m closing out my correspondence spreadsheet with a bit more badassery in my pocket. So let’s get out there, girls. What do we have to lose?