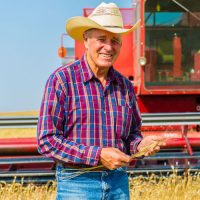 Nominated by: The Farm Report

Bob Quinn is a pioneering organic grain farmer. After leaving Montana to get a PhD, he returned to his family farm and began to make changes to add value. Quinn began milling his own grain and then transitioned his farm to organic. Later, he discovered khorasan, an ancient Egyptian wheat, and created the KAMUT brand to share its benefits with the world., His book, “Grain by Grain: A Quest to Revive Ancient Wheat, Rural Jobs, and Healthy Food,” educates readers on how growing organic, nutrient-dense ancient grains can support individual health, rural communities, and environmental resilience.

The Farm Report: Grain By Grain

Cathy Corison has been making wine for over 4 decades. She was the first woman winemaker-proprietor in the Napa Valley…

In this week’s Cooking Issues Dave and Nastassia answer a bunch of listener questions. We discuss Paella, Mayonnaise Seared Steak,…