Dan Michaud "Ron, Jade Valley and the Power of Place"

When his soon-to-be stepfather Ron rolled into teenage Dan’s mother’s house in an orange Fiat convertible. They began a thirty-year conversation. Dan’s tribute to “Ron who gave me Shakespeare, Miles Davis, and winter picnics” (plus a killer recipe for Beef Stroganoff).

Family dinners are not always happy moments. Our storyteller, Alvin Crawford, with his father remembers his dinners with his father as stressful rituals, more of an inquisition than a time to come together around food. Alvin, now a non-profit executive, recounts how he survived those meals and grew to understand, if not accept, his father’s intensity. And, ultimately, to learn how to enjoy meals with his own young family. 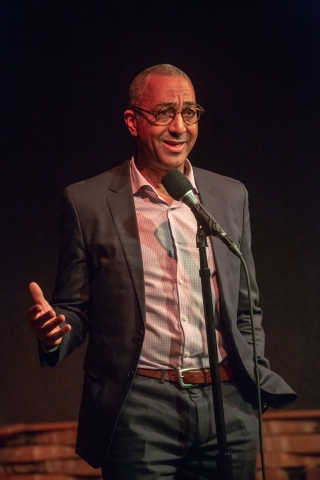 Dan Michaud "Ron, Jade Valley and the Power of Place"

Every good Rom-Com starts with a “Meet Cute” story. And what could be cuter than a first date story that revolves around food?

In this episode we’ll hear from the President of the Greater Boston Food Bank, Catherine D’Amato and from Northeastern University’s Dining Director, Maureen Timmons.

This episode features food writer and columnist, Mike Floreak –– and me, your host, Louisa Kasdon.