On today’s episode of THE FOOD SEEN, how did a character on American political drama The West Wing, inspire a cinematically shot cooking show? Well, whatever the circumstance, Andrew Rea’s Binging With Babish YouTube channel has become a marvel; with over 5 million subscribers, Rae’s recipes are recreated (or created) in admiration of his two greatest passions: the moving picture and cooking. To that effect, he’s now made a BwB cookbook, cataloging some of movies and television’s greatest culinary scenes: Timpano from Big Night, Confit Byaldi from Ratatouille, Prison Gravy from Goodfellas, Buddy’s Pasta from Elf, and of course, Fried Green Tomatoes. 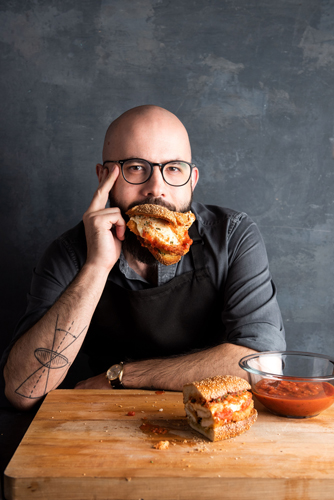 Image Excerpted from BINGING WITH BABISH: 100 Recipes Recreated from Your Favorite Movies and TV Shows © 2019 by Andrew Rea. Photography © 2019 by Evan Sung. Reproduced by permission of Houghton Mifflin Harcourt. All rights reserved.

On today’s episode of THE FOOD SEEN, Andrew Scrivani, our only 3x guest (Ep1, Ep238, and this one), has become…

On today’s episode of THE FOOD SEEN, Nick Muncy is a pastry chef who’s dreams of being an artist was…

On today’s episode of THE FOOD SEEN, in 2006, Yonatan Israel, a Parisian-born filmmaker, opened up Colson Patisserie in Park…

On today’s episode of THE FOOD SEEN, after first meeting Chef David Kinch of Manresa in Los Gatos, CA, Avery Ruzicka was convinced to…

On today’s episode of THE FOOD SEEN, the magnanimous Maangchi, aka “Hammer”, née Emily Kim, is a Korean food YouTube…