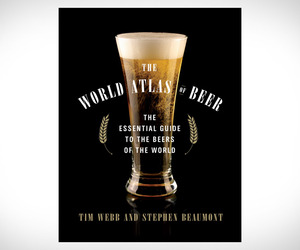 The World Atlas of Beer & Chimay

This week's Beer Sessions Radio is live from Jimmy Carbone's bar, Jimmy's No. 43! Guests on today's show include the authors of The World Atlas of Beer, Tim Webb and Stephen Beaumont, and Chimay ambassador, Luc "Bobo" Van Mechelen. Tune in to hear about Bobo's storied history in the beer world, and why Chimay has been so successful in the United States. Tim and Stephen discuss their reverence for famed beer writer, Michael Jackson, and how their book was influenced by his writings. Bobo and Tim talk about lambics, and what beers can be officially labeled with the title. Hear the gang's opinions on Italian beers, and listen in to hear about some European countries with burgeoning beer scenes! Learn more about beer in South America, Asia, and Africa! This episode has been sponsored by GreatBrewers.com. "By the time we came out of it [writing the book] over a year later, the both of us were reeling that we really hadn't had any idea of exactly how big the beer thing was globally, and is only getting bigger." [12:00] -- Stephen Beaumont on Beer Sessions Radio

"As there are brewers all around the world that are trying to make spontaneously fermented, wild-fermented beers- should 'lambic' become the genuine... from Belgium? And the other revitalized types of beers using wild yeast should just be called something else?"
[20:30] -- Tim Webb on Beer Sessions Radio